In 2012 in the window of a Lush store in London, Central St Martin & Brookes alumni and performance artist Nicole Cataldo-Davies and Oliver Cronk devised a courageous action for cosmetics testing on animals.’ 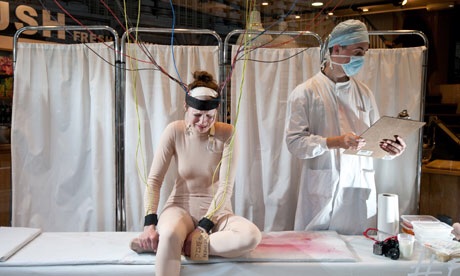 Wearing a nude body suit Nicole was restrained, force fed and injected over a ten hour period in a shop window on London’s busy Regent Street.

The shock tactics appeared to work with onlookers, stopping to sign a petition started by Lush for preventing the use of animals for cosmetic testing and opening up data sharing between large brands. In 992 animal testing was banned in the Europe so business  moved to countries such as China and India where testing continues today.

In March 2013 a law was finally passed banning the sale of any cosmetic products that had been tested on animals.